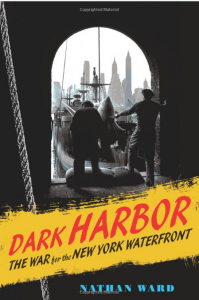 Cover of the hardcover edition (2010) of “Dark Harbor: The War for the New York Waterfront” by Nathan Ward, from Farrar, Straus and Giroux

Oh, the things I’ve done for the sake of Mantis.

A couple days before 2011 began, my girlfriend and I braved the snowbanked sidewalks and trudged through Manhattan’s West Side neighborhoods edging the Hudson—known as the North River during the ‘40s, the time that Lucas is thrown back to.

It was near midnight, and I wanted to get a feel for what the harbor looked and felt like at night. I’ve always been fascinated by harbors—the caw of birds, water lapping against pilings, horns blaring, ships coming and going, from and to strange and mysterious places. Escape, adventure, promise….

But also, danger. Especially in the 1940s. Ships would leave the harbor to face storms, pirates, torpedoes that could put an end—an eternal one—to the adventures of their passengers. A yearning lover might  wait at the harbor for their beloved’s ship to come in and find themselves waiting forever. Refugees fleeing Nazi-threatened or occupied countries might arrive at the dock and be refused entry, turned away, if they didn’t have the right papers. Or anyone who offended the wrong person on the waterfront might be fitted with cement shoes and sent to the river’s weedy bottom.

All of these dangers feature in some way in Mantis, so I really needed to get a handle on Manhattan’s harbor. But there was one danger that hadn’t figured in my mind as I leaned out with my camera over a railing near Pier 93, the quay used by the RMS Queen Mary, the luxury liner that ran between England and New York in the late 30s. Later, in the war, like other liners, it was repurposed as a troopship.

From behind me, the cold wind carried a loud holler, “You, stop right there.” I froze and my cold hands just about dropped my camera in the water. Footsteps closed in on us and a deep voice ordered us both to turn around. Two men, one dressed in a uniform, began to interrogate us, wanting to know what we were doing there, why we were taking pictures.

After listening to our story and checking our camera, and satisfying themselves that they were indeed talking to a harmless writer and his girlfriend, the two men informed us they were acting on behalf of Homeland Security, that the harbor was some kind of priority zone and that we should vacate immediately.

As we shirked across the street, in the shadow of a Hustler club, I considered how different the harbor must have been seventy years ago, long before the law enforced its powers.

To help me discover the harbor of the past, the harbor my hero would haunt, I turned to my usual tactic—scouring Manhattan’s bookstores. At 192 Books in Chelsea, I found Dark Harbor: The War for the New York Waterfront by Nathan Ward. It proved to be a beautifully written book and a perfect eye into the waterfront during the ‘40s—a time when gangsters like “Cockeye” Dunn ruled the harbor with rackets, extortion and violence. Elia Kazan’s Oscar-winning film On the Waterfront, based on Arthur Miller’s play, would help provide visuals—a waterfront sans the gentrified neighborhoods and the trolling Homeland Security guards. A waterfront that includes the now-razed West Side Elevated Highway. I’m grateful to both works for helping fill in the gaps.

Below is a brief excerpt from Mantis—when Lucas learns that the woman he’s been trying to rescue, the woman of his dreams, might have run into one of the harbor’s notorious dangers.

I stand at the edge of a pier on the Hudson, the waterway they’re calling the North River, in my father’s trench coat, shaking inside and trying not to retch.

The sky is overcast and a light drizzle falls, puddling on the cement quay. A few feet away from me, Olivia, wearing a turquoise raincoat, shivers under an umbrella. Beside her Conti yells orders at a couple of men in oilskins operating a dredging barge that bobs in the water below. They’ve been looking for Elsa’s body all morning.

The reek of dead fish and diesel rises off the dark, murky water. Vessels of all types—tugs and ferries, barges loaded with railway containers, lighters piled high with garbage—pack the river. Some float languidly on the surface, others chug headlong through the water, blowing horns and sirens that rattle my nerves.

Nearby, several longshoremen, grappling hooks hanging from their back pockets, sling a giant crate off a steamer. When it lands with an exploding thud on the cement dock, I clasp my hands over my stomach.

Olivia turns to me. “You okay?”

I struggle to appear together. She stares at me till I nod that I’m fine, then turns to Conti. Raising her voice to speak over the racket from the boats and the dockers and the seagulls cawing overhead, she says, “Maybe she’s not in there.”

Conti turns. “Oh, she’s in there somewhere,” he says.

“And you’re sure she was alone?” I ask, wondering whether it was indeed a suicide, and not murder at the hands of the Beast. “Nobody was with her?”

“She was alone. We got a reliable witness says he saw her leap from the top of that container—” Conti points to a large metal shipping container sitting near us “—and smack her head right there—” he aims a finger at the crusty edge of the pier “—before she goes in the water. See the blood stains?”

Nausea rolls through me at the sight of the blood, possibly Elsa’s blood. I hold my breath till it subsides. Once I’ve steeled myself, I say, “That could be fish blood,” my voice cracking despite my efforts.