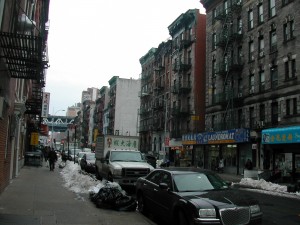 Finding my hero a home in Manhattan 1940 became a little bit of an obsession for me. I had a sense of it in my head—more my gut—a gritty tenement somewhere, a street where footsteps echo loudly, with dark alleys nearby, a railroad floor plan, a rickety floor…. There had to be thousands of these places in Manhattan back then, but where? Where exactly would my hero lay his head once he slipped through time, from 2012 to a New York decades before gentrification transformed large swaths of the island?

I would spend many hours on a few research trips to NYC hunting Lower Manhattan—circling the blocks around Greenwich Village, SoHo, Tompkins Square Park, the Williamsburg Bridge, trying to conjure up what they might have looked like decades earlier and praying that my instincts would tell me I was getting warmer, closer to something I could only vaguely identify as a feeling I expected to get. But that feeling never hit me, until—on a later trip—I trekked through the neighborhoods between the Manhattan and Brooklyn bridges. That’s when I felt that pull inside me, that rush that told me Lucas’s home would have been here—but here was no longer there. Here—in 2011 as I researched the book—stood the Governor Alfred E. Smith Houses, a public housing project built in the 50s. But still, somehow, I felt strongly that Lucas, and his father Lorne before him, would have lived in this neighbourhood.

I badly wanted, needed, to know what the area looked like, smelled like, who lived in it—before the development. On foot, I started to scour used bookstores—dragging along my very patient girlfriend. After ransacking many a dusty shelf, I hit the jackpot on a bottom shelf in Alabaster Bookshop. The find: Life on the Lower East Side: Photographs By Rebecca Lepkoff, 1937-1950. Lepkoff, a brilliant young photographer at the time, made it a personal project to capture life in the area between the bridges. The book contains more than a hundred duotone photos—tenements festooned with laundry, razed lots surrounded by hoarding, laborers with grappling hooks, men hiding in the shadows under the El (now dismantled), seagulls swarming crates by the nearby Fulton Street Fish Market (now moved to the Bronx).

Lepkoff’s work was the key to finding Lucas’s home. As an homage, I named one of my characters after her.

I ended up locating Lucas’s home on the third floor of a cold-water flat on Olson Street, a fictitious street in the neighborhood now buried by the housing project.

Below is a brief excerpt from Mantis—when Lucas comes upon the street where he finds the home he is to inherit from his father:

I’m hoping the neighborhoods will improve as I get nearer Olson, but they don’t, and when I turn onto my father’s street, a narrow cobblestone road flanked by shabby tenements, my throat thickens. I can barely process the thought of my father living in this area, an area so decrepit that the city will soon tear it down, just like the blocks of gas tanks, to make room for a housing development. Did he not make any money working for Kay? Is this the best he could do? I touch his keys again and search the buildings for a number. The odds are on the south side, and his building must be midway down the block.

Slowly I cross the street, a street that reeks of putrid garbage as much as any I’ve walked along tonight. As I step onto the sidewalk, a geyser of steam whooshes out of a nearby manhole. Afterward, there’s an eerie silence, just my footsteps and the faint thump of cars on the bridges a few blocks either side of me. Some windows are lit, but not many, and I see nobody around.

I’m a couple of buildings away from my father’s when I detect another set of footsteps from somewhere behind me, just barely out of synch with mine. I turn, but see no one. I stand and wait, my eyes probing the bands of darkness between the reaches of the street lamps. I scan tenement facades on both sides of the street, searching doorways, every crevice within view. I start to stamp my heels on the sidewalk, mimicking the sound of me walking again. Within seconds, my eye catches on some movement, a shift of darkness under an archway across the street, a few apartment buildings down. I squint to get a better look and feel a sudden jolt when I detect a sliver of a dark jacket and the tip of a hat brim.