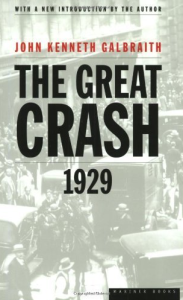 “We lived on milk toast. It was all we had to eat.”

This is what my father would tell me and my siblings to get us to finish our dinner. It worked for me, too well, unfortunately. Terrified that a time would come when all there would be to eat was milk toast, I stocked up, real good. I would eventually shed my protection gut, but for much of my adolescence I was a chubby kid that worried about the Depression. While that might have been a temporary downside to having an older father and taking his stories to heart, a huge upside was learning from someone whose life stories covered so much history—the Great Depression and World War II included. No doubt his many personal tales of those periods have a lot to do with my setting Mantis in 1940, at the crossroads between the Depression and the war.

In my search for a deeper understanding of what my father and the characters in Mantis would have lived through, I turned to The Great Crash 1929, by economist John Kenneth Galbraith. The book covers the origins and the fallout of the stock market crash of October 1929. Sixteen months earlier my grandmother gave birth to my dad. She and my grandfather would have then been enjoying the Roaring Twenties and must have thought they were bringing their child into a wonderful world. A world that would only get better and better. For, as Galbraith reveals, that was the Zeitgeist of the time— the stock market would go up and up forever and everyone was going to get rich….Hmmmm, kinda reminds me of a few years ago when property values could only go up and everyone was going to get rich…..

In the ’20s the wonderful world ended on October 29, 1929—aka Black Tuesday—when people realized that stocks wouldn’t go up forever. The panicked selling was so furious that day that the stock tickers fell behind by several hours. People who swarmed around the tickers all over the country were left to imagine how much they had lost and, fearing the worst, continued to sell. They would find out later that evening that the Dow Jones Industrial Average had fallen almost 12% that day.

The fall would go on and on until 1932 when shares hit 10% of their former values. In the US unemployment would rise to 25%. Six thousand banks would go out of business. Two million people would become homeless. Middle class families who used to enjoy feasts in fancy restaurants would sup on milk toast in dingy quarters. Living the high life was no longer a possibility. People just wanted to get jobs, to eat properly, to find shelter. This was the world that my father grew up in, and the world that Lucas, the hero of Mantis, finds himself in when he travels from 2012 to 1940.

Below is an excerpt from Mantis—taken from the day Lucas arrives in 1940 and discovers a Manhattan still reeling from a crash that happened more than a decade earlier:

At the end of one block I came across a few dozen hangdog men lining up for a help wanted sign at a restaurant—fry cook wanted—and it dawns on me that for the last eleven years all of these people have endured the fear and hardship of the Great Depression. They’re desperate for security and safety and the last thing they want is to go to war, but by year’s end, many of them—as well as their fathers, sons and brothers—will start dying on the other side of the world.

I’m feeling more adrift with every block I pass and the sun is fading. When I reach Madison Square Park, the park I walk through on my way home from work during the summers, I seize on the hope that a few blocks away my apartment building is actually there and that I’ll be able to walk inside and take the elevator up to my floor, walk down the hall and step inside my apartment, putting an end to this experience.

I hurry east along the wide blocks of 23rd Street. It’s a long journey and by the time the corner of First Avenue comes into view the sun has set, darkening the sparsely lit street with a gloom I’ve never experienced before in Manhattan. I quicken my pace, but as soon as I turn the corner I freeze, all the air going from my lungs. Colossal gas tanks several stories tall stand where my middle-class housing development will eventually be built.

This is not a world I will awaken from.

My hand goes to my pocket, finds my dad’s keys and wraps around them, tight. When I eventually take in air I gasp at the odor of gasoline mixed with putrefying garbage and animal dung. I want a cab now, I want to get to my father’s place, but few cars pass on the road and none of them are taxis.

I start walking quickly along the sidewalk, past worn-down storefronts, notices pasted to their windows. Victims of the Depression. For a while I’m under the impression the street is deserted but soon I manage to pick out figures lurking in the shadows of recessed doorways, their faces lit briefly by the strike of a match or the glowing ember of a cigarette. Farther down the block I find a homeless man, gaunt and tattered, lying on the curb in a pool of weak lamplight. He looks up at me with vagabond eyes and asks in a voice dry as sandpaper if I can spare some change. He smells like a dead cat soaked in vinegar. I hold my breath, bend down and stuff a couple of dollars into his tin cup, then keep going.

In a few short blocks I pass enough rubbies and hobos to go broke, but I ignore them. I’ve got less than a hundred dollars left and I don’t know how long it will last, how long I will need it to last. I don’t want to think about my future, about possibly having to join these men on the street, so I don’t.