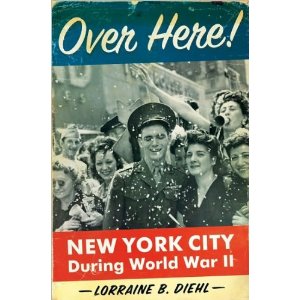 Cover of the hardcover edition (2010) of “Over Here!: New York City During World War II” by Lorraine B. Diehl, from Smithsonian Books, HarperCollins.

“The past is a foreign country; they do things differently there.”—L.P. Hartley

I needed a time machine. It was the middle of the winter 2011 and I was sitting in a coffee shop staring out over a snow-covered Tompkins Square Park in Manhattan’s East Village, working out the story for Mantis. I had decided I wanted my hero to find himself catapulted from Manhattan in the spring of 2012 to Manhattan in the spring of 1940, where he would become a secret agent trying to rescue a Jewish refugee from a clandestine group known as the Black Suits, a group that would at first appear to be involved in a Nazi plot. Though all the characters would be imagined and the paranormal would feature as a growing theme throughout the trilogy, I wanted to stay as true as possible to history where I could. Problem was—all the research I had done to date on the history of this time period hadn’t given me the kind of clear picture I wanted of what it was like in Manhattan at the time.

I knew the spring of 1940 would have been unique for the city. On September the 3rd of the year before, Britain and France declared war against Germany. But the States wouldn’t join the allies till Pearl Harbor, more than a year into the future. While the world war brewed across the sea, the American government would have been preparing for a war it might not be able to avoid, and the people would have been wondering if—and hoping that—they could pull themselves out of the Great Depression. But what exactly would it be like for a Jewish refugee in the city? What were New Yorkers thinking and doing about Nazis—German and American? Those, and a hundred other similar questions, roiled through my mind as I sipped my coffee across from the park.

With great luck, on my way back to my hotel, I found the time machine I needed in the Strand bookstore, one of my favorite places in the world. The book was Lorraine Diehl’s Over Here: New York City During World War II. Later that night, while a blizzard buried the city, I began poring through the book and finding answer after answer to my many questions. As Diehl explains, New York had an odd bifurcation through the ‘30s—while Jewish refugees flooded into the Upper West Side, members of the Bund—a German American pro-Nazi organization—would flaunt the Nazi flag during parades in Yorkville’s Germantown in the Upper East Side and rallies in Madison Square Garden. Stores in Yorkville would openly display Nazi paraphernalia. Anti-Nazi rallies would rage, but the American Nazis fought hard to win support. The mayor, Fiorello LaGuardia, half Jewish, deplored—as much of the city did—the American Nazis and had pursued their demise. As news of German Nazi atrocities spread through New York, anti-Nazi sentiment mounted. Finally in ‘39 LaGuardia succeeded in arresting the Bund’s despicable leader, effectively quashing the New York Nazi movement. So, by the time the spring of 1940 would roll around and my hero would arrive, New Yorkers were suspicious of German spies and on guard for anything Nazi, fearing a fifth column.

Below is an excerpt from Mantis, in which Lucas finds himself on 1940s Manhattan’s streets in a Guns N’ Roses concert T-shirt:

“It’s not safe out there for you, Lucas.”

I step into a narrow hallway where chips in the walls expose multiple layers of paint, variations on the theme of off white. I shamble along a worn runner to the head of a staircase. Kay is waddling down the hall after me, the floor groaning under his weight. I lean into a handrail and hobble down the stairs. The movement causes blood to flow and my legs get steadier with each step. By the time I get to the bottom I’m walking almost normally. I head through a tiny vestibule and out onto the sidewalk.

The sun hits me straight in the face, bright and hot. I squint and put a hand out, feel a cooling breeze on my skin. I take a breath, inhaling the smells carried on the air from the park—of flowers and cut grass. Other smells follow in their wake, of bitter exhaust and fresh paint. I turn. A workman crouches at the bottom of a ladder, stabilizing it for someone standing on the top step painting a storefront sign: Carlo’s Butcher Shop. Someone opens the door beneath the sign releasing a cloud of spicy, redolent sausage. Its odor is tantalizing, real.

On the other side of the butcher’s is a luncheonette spot offering fountain service, a big red Coca-Cola sign projecting overhead. Beyond that, there’s an ice cream parlor selling orange drinks for five cents, a photo shop, cigar store. A newsstand sits on the street corner, above it the cross street signs read E 10th Street and Avenue A. This is Tompkins Square Park. I’m nowhere near the Daniels Museum. And this isn’t the gentrified park I know it to be. It appears to be working class.

I feel a hand on my back. “Lucas—” Kay nods to the doorway. “You’re in danger out in public, dressed the way you are. Let’s go back inside.”

I take a step forward, away from Kay. I look around. Kids are swinging from monkey bars in a play area in the park. A woman pushes a squeaky stroller along a paved path. A young boy with a cap polishes the shoes of a businessman sitting in a chair reading a paper. I shake my head. All so real, all so impossible.

A boy on a bicycle clatters past me just under my nose. He continues for a few more seconds then sticks his foot out and screeches to a halt. He swivels around to face me and stares, mouth agape, at my T-shirt.

Kay steps back into the doorway. “Now, please, Lucas, come back inside. Your undershirt. It looks like a death’s-head—the symbol of the Nazi SS.”

But I stay rooted in my spot. The boy stabs a finger at me and starts hollering. He’s looking down the street and I turn to follow his gaze.

A policeman, the same policeman I saw in the subway, is strolling down the sidewalk about thirty yards away. He looks to the boy, then to me.

From the doorway, Kay gestures frantically for me to hurry inside.

I spin around, trying to assess whether I should run, and which way—across the road to the park, or down the street. The cop is closing in.

“Lucas, listen to me, you’ll get caught out there. You have no papers. Manhattan has no sympathy for Nazis now. They’ll send you to Sing Sing and you’ll be stuck there forever. You’ll die there.”

I glance at the cop, who’s running now, hand hovering over his holster. I dash back into the building. Kay tells me to run, hurry, go change into some of my father’s clothes from the closet.

Within seconds, I’m up the stairs and back in the office, undressing. I’m standing by the closet tugging down the sleeves of my father’s wide-lapelled double-breasted brown jacket by the time Kay enters, wheezing.

I’m fully dressed except for socks and shoes. I ask Kay for those, but he waves a hand. “Don’t worry,” he gasps. “Just get behind the desk.”

He closes the door just before the shadow of the cop falls across the frosted glass. Kay grabs one of the fedoras from the nearby coat rack and deftly—for a stocky man—twirls it through the air at me like a Frisbee. I put it on, lower the brim then sit down and flip open one of the files on the desk, pretending to work. The smell of my father wafts from the clothes. It’s his scent minus the fifteen years of dust. My throat thickens.

The cop raps on the door frame, rattling the glass. “Police. Open up.”

Kay opens the door and invites the officer inside. “How can I help you?” he says in a bright, cheery voice.

Heavy shoes thump on hardwood as the cop steps into the room. He’s huffing and in a breathy voice introduces himself as Officer Brian O’Keefe, says he’s looking for a young man dressed in dungarees, some kind of odd footwear and an undershirt that bears a Nazi death’s-head.

With my face still turned to the desk I shake my head.

“Nobody’s come in here all day,” Kay says. “It’s just been the two of us working.”

“Right.” O’Keefe’s shoes sound on the floor. He’s walking around, gradually making his way toward me.

“It’s terrible,” Kay says, “these Nazis, they’re all over Manhattan now, aren’t they?”

O’Keefe’s shadow darkens my desk. I’m flipping through pages in the file folder, keeping my head down.

He moves to the edge of the desk and I pray he can’t hear the thundering of my heart in my chest. A thick, calloused palm appears before my downturned eyes. “Your papers, sir.”