Why I set part of Mantis in the mysterious and exotic Casbah of Algiers has a lot to do with a little cartoon skunk. His name was Pepe Le Pew and he was one of my favorite Looney Tunes characters. As a kid, I loved watching Pepe—a hopeless romantic with a suave Parisian accent—hit up every female black cat he saw who happened to have a white stripe on her back. The cats would always run from his stench and Pepe would saunter after them through the streets of Paris. In his narcissictic mind, the misfortunately colored cats were flirting with him.

One episode that I particularly loved was a 1954 episode called “The Cat’s Bah”. Pepe, now living in the Casbah, spots a cat visiting from America and immediately dashes off to make his move. The chase that follows takes us through the Casbah with its twisted alleys, narrow archways and Arabian marketplaces. This labyrinthine city fascinated me and I would tune in every Saturday, desperate for a rerun of that episode.

As I grew up, Pepe’s Casbah would linger in the back of my mind as a place of mystery and romance. And so, when I came to plotting out the various settings in Mantis, I chose the Casbah for the finale.

For my visual research I would go a little further than Looney Tunes and turn to the few major films that have been made of the Casbah—The Battle of Algiers (1966), Casbah (a 1948 musical film), Algiers (1938) and Pepe Le Moko (1937, French).

The Battle of Algiers is a critically acclaimed political film, while the other three are variations on the same story about a jewel thief. Casbah, the most recent, is a campy, musical remake of Algiers, which is a great film and near replica of the French precedent, an even greater film. The hero of all three movies is the thief, Pepe Le Moko, from whom Pepe Le Pew gets his name. If you check out the short episode of “The Cat’s Bah”, you’ll spot a reference to Le Moko.

I was eager to see the three films because they include actual footage of the Casbah.  Algiers was of especial interest because it predates the Mantis storyline by only two years. Though rough in spots, Algiers would prove to be a fantastic revelation of the ancient fortress city and its motley population of Arabs and Africans, Gypsies and expats from all over the world. And among them, the pickpockets and grifters, the demimondes and snake charmers. 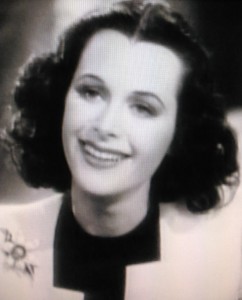 Part of the film’s appeal, of course, is the allure of the gorgeous Hedy Lamarr. Algiers, in fact, was the inspiration for Casablanca and Lamarr was originally slated for Ingrid Bergman’s role. But MGM wouldn’t release the actress to Warner Brothers, the producers of Casablanca. Algiers is now public domain. TCM plays it occasionally, but you can see the full film on YouTube. You can also see The Battle of Algiers and Pepe Le Moko in their entirety and a clip of the opening of Casbah.

Below is an excerpt from Mantis of Lucas’s arrival in the Casbah. Enjoy.

As our ship blares its siren on approach into port, the three of us stand on the prow with our hands on the gunwale. The salt air blows in our faces while we stare out at the Casbah, a white city glowing under moonlight. An imposing line of imperial buildings—wide flat facades standing on arcaded bases—hugs the shoreline. The Low City, the new city, Nick informs us. Above and beyond it, the ancient High City crawls higgledy-piggledy up a mountainside—minarets and domed cupolas of mosques reach up out of a chaos of crammed and haphazardly arrayed buildings. It is the city of my dreams, the place where Elsa and I are together. My heart jolts.

After disembarking and passing a time-consuming inspection, we make our way out of the harbor on foot, hauling our luggage up an inclined road paved with flat stones. Large civic buildings stand on our right and to our left are shops and eateries, from whose open windows flow various pleasant aromas—of spices, olives, roasted nuts—all mingling with the pungency of human sweat rising off the throngs crowding the street. Half the people are Arabs, men in jubbahs, women in burkas and hijabs, the other half are French settlers and Europeans, many rushing in and out of port. They all move with a distinct agitation, for as in Marseille, the news of Germany’s advances buzzes on their lips.

As we climb uphill through the crowd, we’re all looking out for Black Suits and dictyoptera. Nick has explained to Olivia what the Black Suits really look like and how to spot them. Every now and then I catch her looking in her periphery, her eyes filled with the fear she might actually see the giant writhing insects.

With the aid of a map drawn by Rosa, Nick leads us to a crowded plaza. On the far side looms a large archway, the entrance to the Arab quarter of the old city. We head through that and begin climbing up a winding stepped laneway between stucco dwellings with small lattice windows. Several young boys offer to carry our luggage but we shoo them away. Dozens of beggars, in rags and turbans, sitting crossed-legged, hands outstretched, plead for money, but we ignore them all, as does the rest of the foot traffic shuffling up and down. The occasional musician sweetly playing a warbling wind instrument is a pleasant treat.

Higher up, the lane narrows and flickering torches, some fixed to walls, some carried by hand, light our progress ever deeper into a dark labyrinth that becomes increasingly disordered and nonsensical. Walls jut at every odd angle, second stories are cantilevered overhead, propped up by rows of wooden poles dug into plaster, and steps seem to lead to nowhere as though designed by Escher. In darkened recesses, people lurk, smoking pipes, and whispered voices funnel, amplified, out of alleyways, joining the scattered echo of conversations all around us. Olivia startles as a monkey wearing a vest and a black-tasseled fez whips past her, a large yellow fruit in one of its forepaws.

We enter a tunnel where drainpipes, poking out of the walls, ooze a filthy liquid that swirls down channels at the sides. We all gasp and hold our breath against the overpowering stench of urine and excrement till we debouch on the other side into a public square surrounded by inns and shops and shuttered market stalls. People, mostly Arabs, are about, many standing outside doorways, talking, smoking. A group of teenagers roughhouses around a fountain in the middle. I’m struck suddenly by déjà vu. I’ve seen this place before…